Swordfights are not a thing of the past: Local historic group visits Dragonfest 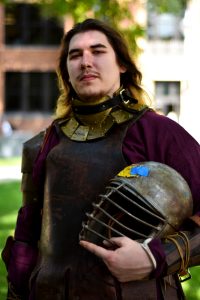 On Tuesday, Sep. 11, he found himself fighting an opponent in full body armor on MSUM’s Campus Mall. Shouts and the thud of swords hitting shields, and occasionally bodies, rang in the air. The two combatants circled each other, exchanging blows.

A student at MSUM, Mann was fighting his first combat demonstration of heavy full-contact fighting.
The swordfight was sponsored by the Society for Creative Anachronism, of which Mann is a member. The SCA is a nonprofit organization that puts on reenactments and encourages people to learn about history in a hands-on way.

After finishing his fight, Mann spoke to The Advocate about his first experience practicing heavy full-contact fighting with members of the SCA.

“The first time I got the snot just absolutely beat out of me,” Mann said. “Another fighter…she had a great sword, like one of those two-handed meat cleaver things, came underneath my shield, ‘Whack!’ They said it sounded like a meat cleaver hitting a rump roast, [there was a] huge bruise. There is a little bit of risk, but also, you know, so does football.”

Mann got involved in the SCA over the summer. He was living on campus and had a lot of time on his hands. While at a convention he saw the SCA doing a demonstration and decided to join. He was interested in combat demonstrations. Since becoming a member, he now has a “SCAdian” identity, Torvald Bjornson.

Mann explained that the SCA does two kinds of fighting, fencing and heavy full contact. In fencing the combatants will wear a mask and leather jacket and try to “poke” each other with a rapier. In heavy full contact, both combatants wear full armor. They are required to have their cage, joints, head, hands and neck protected. They fight with a variety of weapons, including a sword and shield, double sword, great sword, axe and spear.

“We’ll beat each other up, but we still like each other,” Mann said about the camaraderie of SCA members.
Ron Williams, a former Professor of Technology at MSUM, became involved in the SCA 12 years ago along with his daughter.

“You don’t have to do anything except show up. You don’t have to pay a membership. If you just come out to the events that we do and talk to us, you find the things you’re interested in,” Williams said.

Williams’ area of interest is woodwork, but he has also been involved in fencing and is the treasurer for the local SCA group. He explained that there are many areas of interest in the SCA for people to pursue, including singing, dancing, blacksmithing and cooking.

“It’s a hobby. It’s just what people like to do. It’s history, it’s research,” Williams said.

Every week the local SCA group meets at Gooseberry Park, where the fighters put on armor and fight. Those of the group not interested in fighting might try to memorize a song, do some weaving, work on painting or do calligraphy.

“Just a time to be together, it’s social time,” Williams said.

“I think the big thing that really hits home for me is the camaraderie,” Mann said. “Cause the way that we like to put it is we’re one big dysfunctional family. We definitely look out for each other. Also we have members of our family who will go out onto a field and hit each other with sticks,” Mann said.

The SCA meets every Thursday at 7 p.m. in Gooseberry Park in Moorhead. If new people want to visit the SCA and try fighting, Mann said that the society will provide the armor.