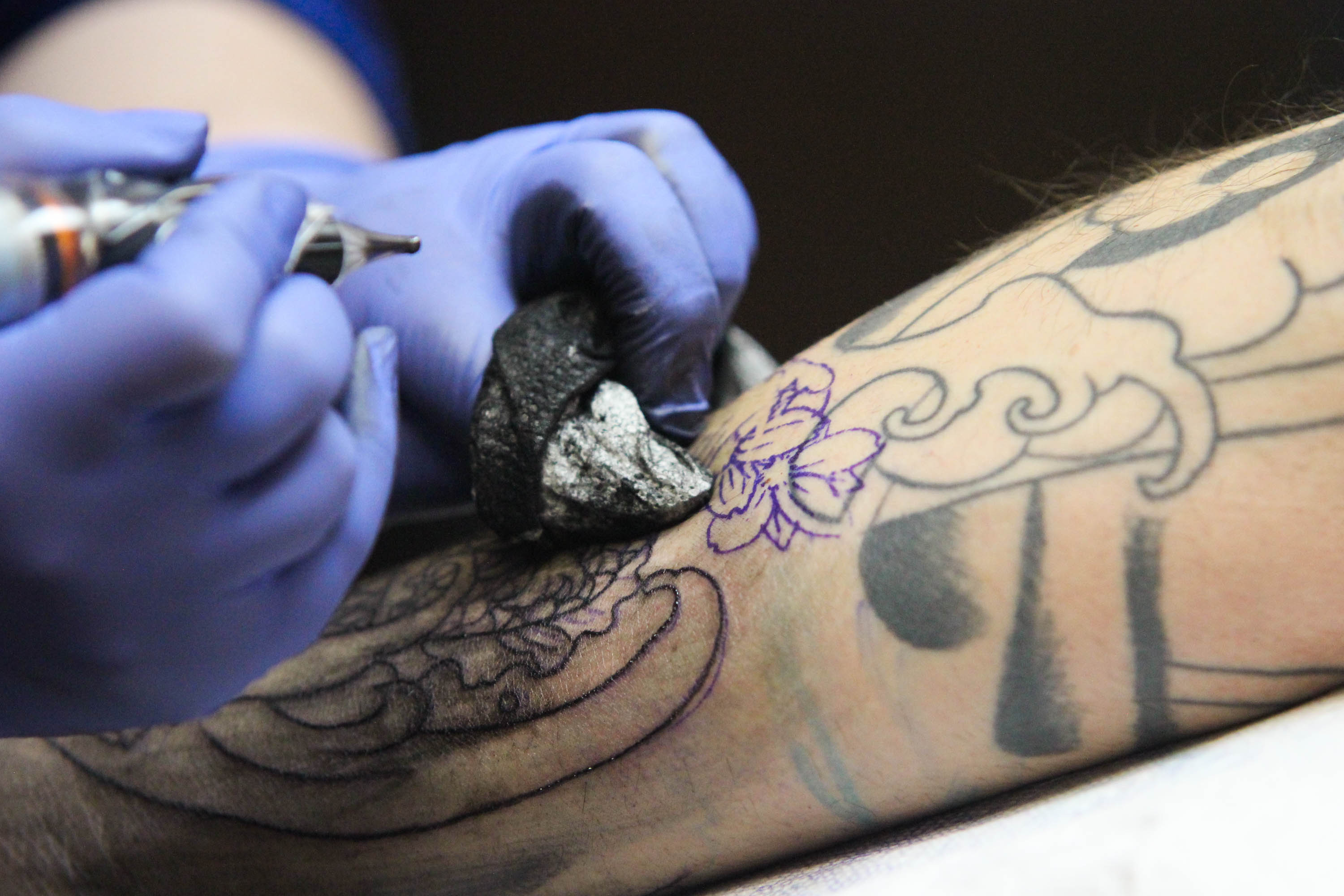 For Anita Burbeck, “tattooing is no longer just fun. It’s an obsession.”

At the start of her career 30 years ago, Burbeck was one of the country’s only women tattooists. In 1983, she opened the first tattoo studio in Moorhead and battled the city council to shape the tattooing community into what it is today. The 62-year-old MSUM alumna has seen stereotypical perceptions of tattoo enthusiasts evolve from outlaws and criminals to artistic expressionists.

“I was trying to convince people that tattooing didn’t have to be nothing but drunks and reprobate people — that tattoo studios are a proper and respectable business,” said Burbeck, founder of the Golden Needle Tattoo Studio in downtown Moorhead.

At a young age, Burbeck was an accomplished portrait painter and had a love for painting animals like horses. In high school, she dreamed of attending a four-year college for fine arts, but enrolled in a tech school come graduation.

“My high school advisor said I wasn’t worthy of (a four-year) college, because I came from such a sh*t-poor family,” Burbeck said. “In his eyes, I was only good enough for a tech education.”

Burbeck attended M State and received a degree in commercial art. She got a job in Owatonna, Minnesota, at Jostens, a manufacturer specializing in class rings, school yearbooks, photo gifts and graduation announcements. Burbeck worked in its art department until she was fired.

“It was one of the most misogynistic companies I have ever experienced in my entire life,” she said. “Getting fired from that job was the best thing that ever happened to me.”

Burbeck said many of her male bosses would nibble on women coworkers’ ears, rub their hands up and down their backs and make sexist remarks.

“I was done (when my boss) came up behind me and pinched me in the ass,” she said. “I came around with a clenched fist swinging. Yeah, I was fired the following Monday.”

Burbeck and her husband moved back to Fargo-Moorhead, where she continued to do freelance design and commercial art for local companies.

When Burbeck was 30, her friends in the F-M Crusaders Motorcycle Club nagged her daily to pursue a profession in tattooing.

“I was coerced into the world of tattooing,” she said. “It was not a voluntary decision.”

They saw her drawings, paintings and other work and insisted she pursue a career in the field.

“It was something I considered doing to just stop being picked on,” she laughed.

In January 1976, Burbeck attended the first ever world tattoo convention at the Marriott Hotel in Houston, Texas.

“At that time, the hotel personnel were a little nervous to have all these colorful people walking around,” she said. “They thought people with tattoos were only prisoners, ex-convicts, biker gang members and just the scum of the earth.”

At the convention, her husband got a tattoo from master tattooist Don Nolan. As Burbeck watched on, she stumbled into an obsession.

“(Nolan) was taking those thoughts, conceptional ideas and compositions … that I was doing on a canvas, and doing it on people’s bodies,” she said. “To watch a master at work ­— now that was inspiration.”

Burbeck said the convention changed more than just her perception of tattooing.

“By the end of the convention, the (hotel staff) said they had never encountered a more polite and helpful group of people,” she said. 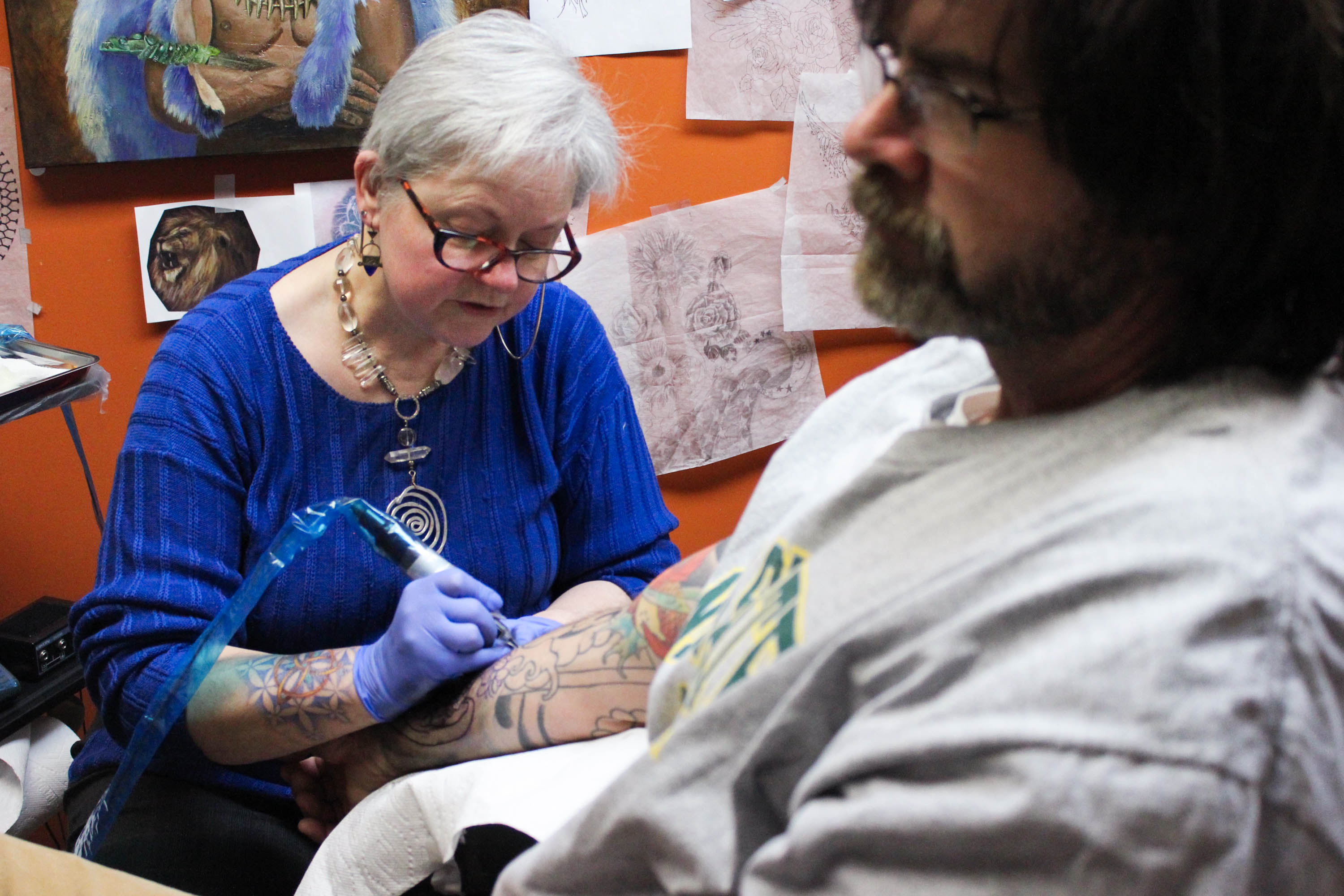 “Right from day one, I learned proper sterilization procedures and health care techniques,” she said. “I was lucky to have the teacher I did to teach me the right way — the healthy way, the careful way — to tattoo.”

Burbeck’s first tattoo was on the stomach of a member of the Crusaders who had lost a significant amount of weight.

“It was a big, bald eagle in full, complete power dive with a bloody rat in its claws,” she said. “His abdomen had stretched out. (It was) tough skin that was difficult to tattoo.”

Burbeck was pregnant at the time, so she had to work around a “big, round lump.”

After mastering the art of tattooing, Burbeck was determined to open her own studio in Moorhead. At the time, commercial tattooing studios were outlawed by city government.

“It took a while to convince the city of Moorhead that tattooing was a legitimate business,” she said.

The process took more than six months of meetings.

In 1983, Burbeck opened her studio, Golden Needle, in her Moorhead home. But after just six months, the city council outlawed tattooing again.

“I was like, ‘You cannot do that, I’ve done nothing wrong,’” she said. “I followed all their rules and regulations. I sat with them for another six months while I told them that taking my business away from me was illegal.”

After the council finally allowed her to reopen, Burbeck was given a second wave of regulations. The council said the only advertisement she could have outside her studio was a 24-square-inch sign.

“So I made a 24-square-inch sign that just said ‘Tattoo’ and put it in the window,” she said. “The rest of the exterior of my house was covered entirely of hand painted … dragons, gallic warriors, Japanese geisha maidens, gnomes. There was nothing in the regulations that said I couldn’t decorate my house. I made it so when people drove by, they wondered what was going on there.”

Council members weren’t the only ones with misconceptions of Burbeck’s intentions. One night, she noticed a vehicle on the street outside her home. When the car didn’t move for three days, she started to get curious.

“I found out it was the FBI running license plates of my clients to see if I was running a drug cartel,” she said. “The hardest drug I had there was aspirin.”

It seemed Burbeck couldn’t catch a break. After gaining the trust of the city council and FBI, residents and management of the apartments behind her home started terrorizing her dogs, hitting them with sticks.

“It was the last straw when the building manager poisoned my dogs,” she said. “One of (the dogs) actually died.”

Burbeck packed up her needles and ink and moved her business to a commercial location at 1825 Main Ave. in Moorhead. Outgrowing the space, Burbeck took on a business partner and moved to Golden Needle’s current location of 112 7th St. S. in downtown Moorhead.

Burbeck said the boom in clientele could be attributed to the change in society’s attitude toward tattoos in recent decades.

“People were showing more interest in the world of tattooing,” she said, adding that TV shows like “Miami Ink” and “Bad Ink” helped eliminate stigma surrounding the practice. “Those programs brought out the questions of why people are getting tattoos. It showed that people get tattoos as an expression of their heart, their spirit and their memories.”

Burbeck saw people of all ages, races, religious denominations and genders taking an interest in tattoos.

“It was not only interesting to see a change in the number of women getting tattooed, but also their attitude,” she said. “I could see women were finally valuing themselves, their own opinions, and their own desires. People are no longer concerned about the … opinions of those around them. They are living for themselves.”

When Burbeck first started tattooing, she said, women often weren’t getting tattoos because of influence from fathers, boyfriends and husbands.

“Now, grandmothers are coming in and getting tattoos,” she said. “They would tell me they have always wanted to get a tattoo since they were young, but their husbands or fathers didn’t want them to get one.” 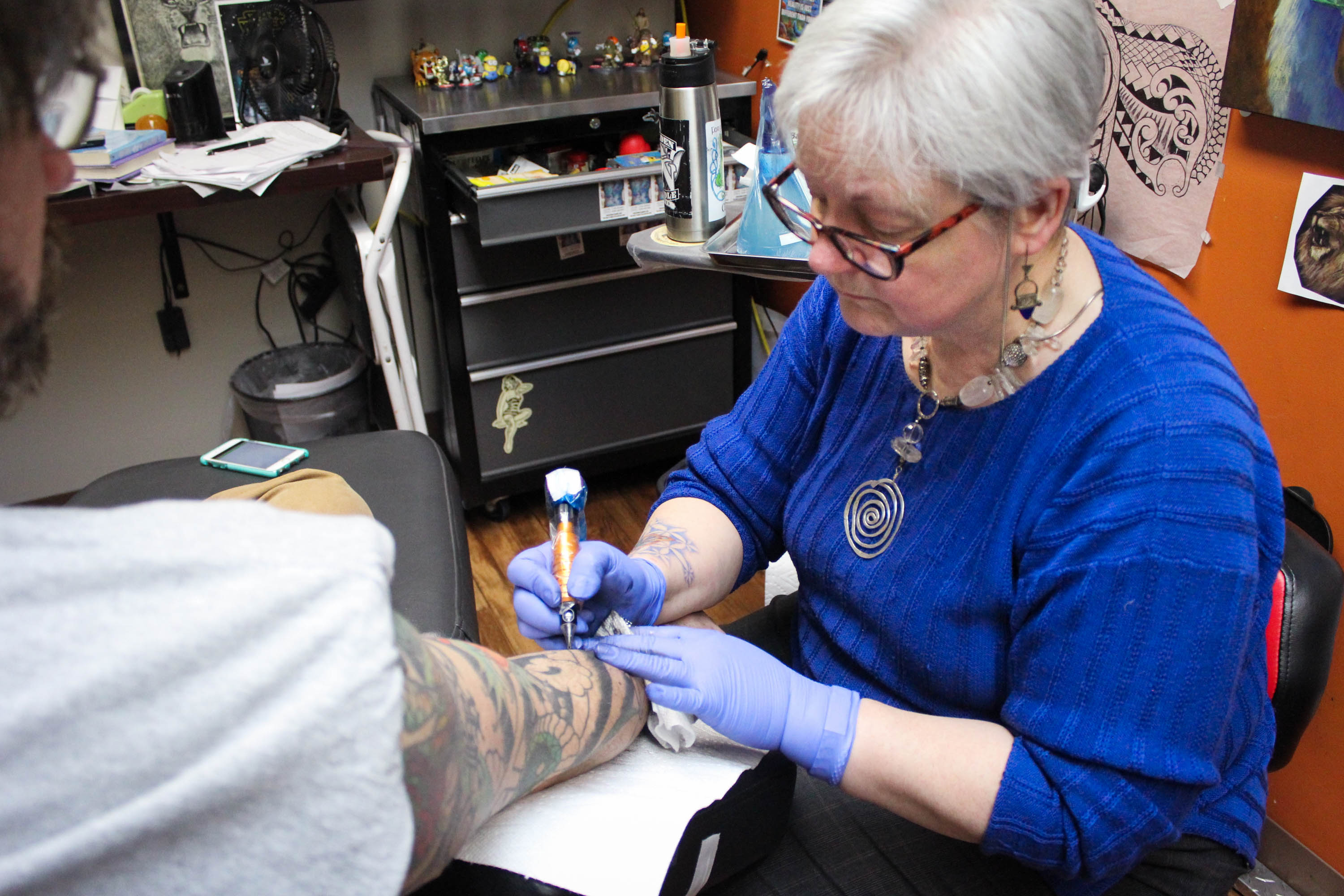 In 1987, after divorcing her husband of 13 years, Burbeck lived out her dream of getting a bachelor’s degree in fine arts at MSUM. It took her seven years to graduate, working full time running Golden Needle and mothering two children. While enrolled, Burbeck took courses in humanities, English, history, mythology, Native American design and world religion. That background gave her an edge in the industry.

“When I’m creating a design, I understand the mythological background, the symbolic language, the origins, where it comes from and how it profoundly pertains to their life,” she said. “In the end, I am weaving a story for them … They leave with a richness of knowledge about themselves that they didn’t have before, because I was able to give them those bits of history I learned from taking those classes.”

Burbeck paints her designs before tattooing to give her clients a full notion of her artwork. The practice is particularly useful in cover-up commissions — one of Burbeck’s specialities — which require strategic planning to be executed successfully.

“What you wear upon you affects you to the very soul of your very being,” Burbeck said. “If you have a design on you that is very negative in context … it causes all kinds of emotional distress, spiritual distress, and it can hit you on many levels of your conscious and subconscious.”

Burbeck said she uses psychic abilities to guide her through “healing” tattoos, channeling client’s spirits and those of others who have passed.

“My reality is different than yours,” she said. “I have the abilities to hear and perceive spirits, then I design imagery through what I see or (what is) given from those entities. My art is designed to heal, not because I’m consciously doing it, but because that is how it oozes out of me. I have the ability to create art that makes the heart and soul sing. It’s marvelous.”