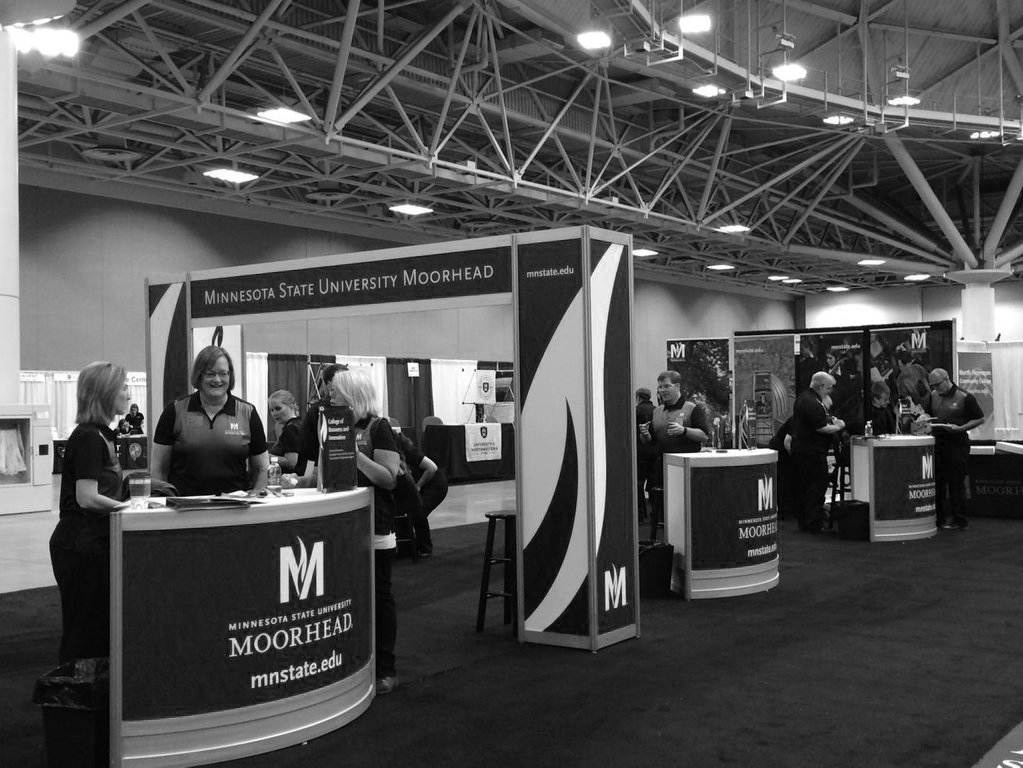 As MSUM staff and faculty set up an informational booth at the Minnesota National College Fair in Minneapolis, they faced an opportunity to combat the university’s declining enrollment.

The National Association for College Admission Counseling hosted its annual fair Oct. 21 – 22 for high school students and their parents to interact with and consider the more than 300 universities in attendance as prospective colleges.

With more than 15 staff and faculty members present, MSUM’s Director of Undergraduate Admissions, Shaun Manning, said the fair served a purpose for MSUM.

“Any time we can get in front of 25,000 students, that’s bound to help us increase our enrollment numbers,” Manning said.

“We want our faculty to be able to talk to prospective students,” Manning said.

University representatives set up the booth in two parts. The admissions section provided students with general information regarding the school, while the academic section addressed questions regarding MSUM majors and fields of study.

Professor Tracy Gompf of the College of Humanities and Social Sciences attended the fair for the first time. Gompf believes that by having professors present, MSUM reached out to students, providing more than general facts about the university.

“I watched one person talk to a professor, and it was close to 25 minutes,” Gompf said. “I’m certain that person would enroll here.”

For the past seven years, MSUM has made an appearance at the fair. Beginning last year, President Anne Blackhurst began attending, with the hopes of drawing higher enrollment numbers.

Gompf agreed MSUM’s presence at the fair is unique because of Blackhurst’s being there.

“I don’t think you saw at any other booth, a president escorting a student from admissions to talk to a professor,” he said. “That sends a message to students and parents.”

Manning said so far, the admissions department has attended nearly 20 local college fairs in the past six weeks. The fairs have taken place at high schools and colleges in Minnesota and Wisconsin. MSUM attended its first national fair of the year in Chicago.